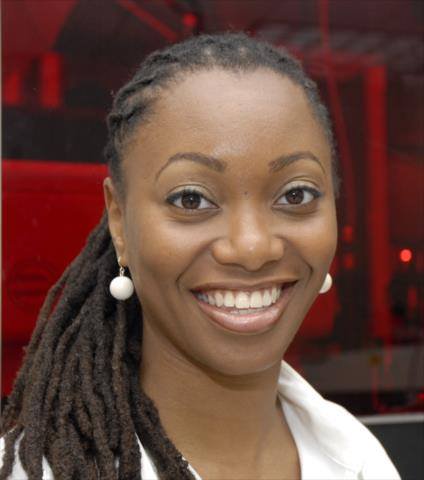 When Dr. Hadiyah-Nicole Green receives invitations to be a guest speaker for professional groups, schools and nonprofit organizations, she almost never turns them down.

“Usually if there is an invitation to speak at a forum like that, I accept it because I feel like it’s a responsibility,” she said. “There are so few of us (black women in STEM fields) I don’t feel like I have the luxury to say I’m too busy.”

By many measures, Green has been extremely busy. One of fewer than 100 black female physicists in the country, she recently won a $1.1 million grant to further develop her patent-pending technology for using laser-activated nanoparticles to treat cancer.

A tomboy as a child, Green was crowned Homecoming Queen at Alabama A&M University (by a landslide vote), earned her master’s and Ph.D degrees at the University of Alabama at Birmingham, and is now is an assistant professor in the physics department at Tuskegee University.

It’s tempting to see Green for all the ways that she is unusual – not the least for winning a large grant at a relatively young age, and for being black and female in a field dominated by white men – but it’s not something she said she thinks about in her day-to-day life.

“It looks like I’m special, but I’m not. I’m no different from anybody else,” she said. “When opportunity found me, I was prepared.”

Green’s personal history with cancer fuels her drive to find a way to treat it. She grew up in St. Louis and – after the death of her mother and father – was raised by her aunt and uncle, General Lee Smith and his wife, Ora Lee.

When Ora Lee was diagnosed with cancer, “She refused the treatment because she didn’t want to experience the side effects,” said Green. “It was heartbreaking, but I could appreciate she wanted to die on her own terms.

“Three months later, my uncle was diagnosed with cancer.”

Green took time off from school to help him through chemotherapy and radiation treatments. “I saw first-hand how devastating it was, and I could understand why my aunt didn’t want to go through that.”

She earned a bachelor’s degree in physics with a concentration in fiberoptics, and then a full scholarship to UAB. She got the idea to use lasers to treat cancer without the side effects of chemo and radiation.

A few months ago, Green was awarded a $1.1 million grant to work on a technology that targets, images and treats cancer.

I’m no different from anybody else. When opportunity found me, I was prepared.
“I was completely overwhelmed with joy, with thanksgiving, humbled at the opportunity that a group of my peers thought that my work was worthy for such a grant,” she said. “This is a huge door opening. It outlines a path to take this treatment to clinical trial.”

Green had spent seven years during her master’s and doctoral programs at UAB, developing a way to target cancer cells – not the healthy cells around them.

“I’m really hoping this can change the way we treat cancer in America,” said Green. “There are so many people who only get a three-month or six-month survival benefit from the drugs they take. Then three or six months later, they’re sent home with no hope, nothing else we can do. Those are the patients I want to try to save, the ones where regular medicine isn’t effective for them.”

The way the technology works is that an FDA-approved drug containing nanoparticles is injected into a cancer patient and causes the patient’s tumor to fluoresce (glow) under imaging equipment. The goal is for a laser to activate the nanoparticles by heating them.

“They are not toxic, so without the laser they won’t kill anything, and the laser by itself is harmless, so without the particles it won’t hurt anything,” said Green. “Because of their need to work together and their inability to work apart, I can insure that the treatment is only happening to the cancer cells we target and identify.”

While Green is not the first to think of using lasers and nanoparticles to treat cancer, she’s been able to work the bugs out of parts of the technology that have been problematic, like nanoparticle delivery and seeing success in living animals – mice, in Green’s case.

“As a physicist I’ve created a physical treatment that is not specific to the biology of the cancer,” she said. “It’s a platform technology. It’s not cancer type-specific, though it can treat the cancer specifically. That’s a concept my friends who are biologists struggle with.”

As she moves forward with her research and with teaching at Tuskegee, Green makes time to speak at schools, Boys & Girls Clubs and other youth events.

“People told me to make good grades and stay in school,” she said, “and I always take good advice to heart.”

Green said she feels a responsibility to be a positive example and change stereotypes of black women portrayed in media.

“There are black female scientists who don’t get media exposure,” she said. “Because of that, young black girls don’t see those role models as often as they see Beyonce or Nicki Minaj. It’s important to know that our brains are capable of more than fashion and entertainment and music, even though arts are important.”

Green has mentored several young women, many of whom have gone on to receive degrees and jobs in science-related fields.

“It takes a village to raise a child,” she said. “I repeat that because a village of people helped raise me and instill values in me, and encouraged me to get to this point. I did not get here by myself. Because of that clarity, I know my responsibility to encourage and mentor the next generation.”